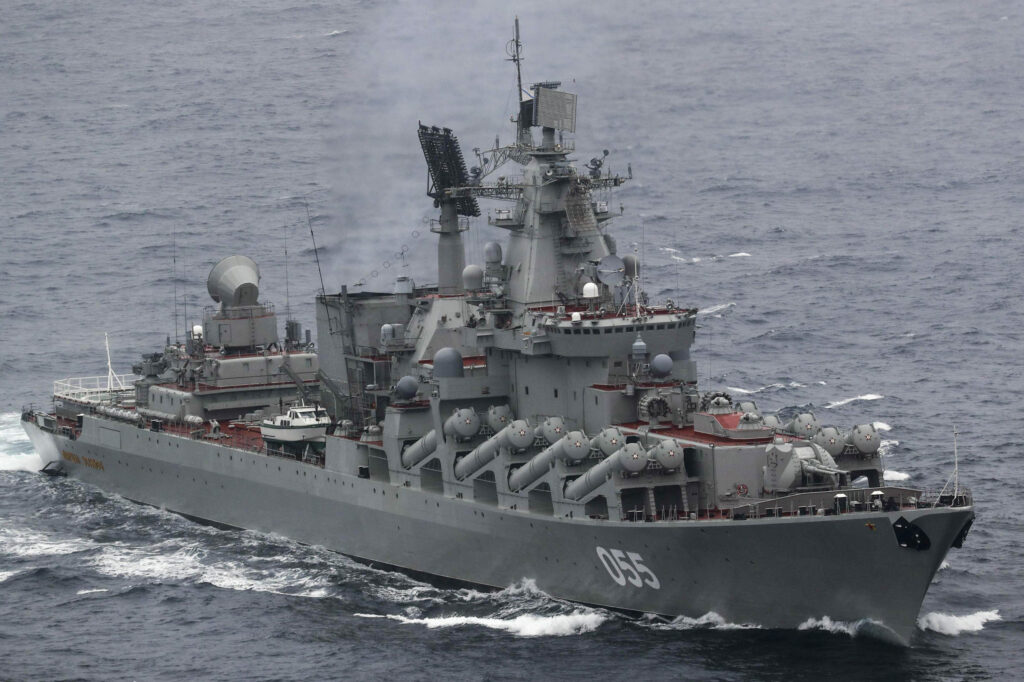 By the Editor:  With the permission of the Defence Studies Department of Kings College London (https://defenceindepth.co) the Naval Review’s Book Review Editor considers the Russian Navy activity of late, and especially with respect to Ukraine.

The Russian Navy has and continues to provide an important supporting role in Russia’s operations against Ukraine. This has included undertaking highly visible deployments in the pre-invasion phase and maintaining a presence in the eastern Mediterranean (augmented with additional Aerospace Forces’ – VKS – maritime strike assets in Syria) to provide direct support for the campaign. This has been evident, for example, in the use of Kalibr long-range cruise missiles, in establishing sea control and in operations involving amphibious forces. In response, Western naval forces, in particular operating under the auspices of NATO, are contributing to deterring any potential Russian threat beyond Ukraine. Notably, the United States has placed the Harry S. Truman carrier strike group under NATO command, the first time since the end of the Cold War that such an arrangement has been made.

Through the course of the Russian military build-up from late 2021 and ‘diplomatic efforts’ to ‘negotiate’ new security treaties with the US and NATO, the Russian Navy engaged in a series of high-profile naval exercises and deployments. Most notably, on 20 January 2022, the Russian Ministry of Defence announced that 140-plus ships, submarines and support vessels would undertake a series of exercises in January and February in waters around Russia and in the North Atlantic, Mediterranean, Sea of Okhotsk and the Pacific.

Whilst demonstrating Russia’s naval presence and pretensions of ‘great maritime power’ status, the exercises also served as cover for the deployment of significant naval forces to the Mediterranean and the Black Sea. Both the Northern and Pacific Fleets deployed Slava-class cruiser-led surface action groups (SAG – including Udaloy-class destroyers and the Gorshkov-class frigate Admiral Kasatonov) to the Mediterranean. Moreover, an amphibious task group comprising five Ropucha-class and the Ivan Gren-class Pyotr Morgunov LSTs (tank landing ships), drawn from the Baltic and Northern Fleets, also deployed via the Mediterranean to the Black Sea in February 2022.

By 24 February and the start of the Russian invasion of Ukraine, the Russian Navy had in the Black Sea, the Slava-class cruiser Moskva (flagship of the Black Sea Fleet), two Admiral Grigorovich-class frigates, three Buyan-M-class corvettes and a Varshavyanka-class diesel-electric submarine (SSK), which apart from the Moskva, are all armed with the Kalibr family of cruise missiles. At least 10 LSTs were also in the Black Sea. In the eastern Mediterranean, the Russian naval force comprised two Slava-class cruisers, two Udaloy-class destroyers, two frigates (a Gorshkov and Grigorovich-class), one Buyan-M-class corvette and two Varshavyanka-class SSKs.

Additionally, ten Sukhoi Su-24 Fencer, six Su-34 Fullback, six Su-35 Flanker M, at least one Kinzhal-armed Mig-31K Foxhound and four Tu-22M3 Backfire bombers, which are all capable of prosecuting maritime strike missions, were also deployed to Syria.[1] A battery of SSC-5 Stooge anti-ship cruise missiles were also available in Syria to provide support. It is likely that a nuclear-powered attack or guided missile submarine(s) of the Northern Fleet is also deployed in the Mediterranean as part of the wider Russian maritime posture in the region, which apart from providing a concentration off the Syrian coast (potentially for a photo opportunity on 24 February), is likely positioned to counter the deployments of three NATO carrier groups led by the Harry S Truman, the French Navy’s Charles de Gaulle and the Italian Navy’s Cavour. At the time of writing in early March 2022, and according to open source intelligence, apart from the Admiral Kasatanov – which as of 5 March was in the Aegean – Russian naval forces in the Mediterranean remain concentrated off Syria.

The Russian Navy has provided an important supporting role to the invasion of Ukraine. In particular, this has been through the enforcing of a de facto blockade of Ukraine’s Black Sea and Sea of Azov coasts and by conducting long-range strikes with ship- and submarine-launched Kalibr cruise missiles (the Ukrainian Ministry of Defence reported that more than 30 Kalibrs were launched in the opening Russian assault). An amphibious landing was also undertaken west of Mariupol as part of attempts to seize that city. As part of the opening phase of Russia’s operations, the Ukrainian Snake Island was bombarded by the Moskva and Buyan-M-class corvette Vasily Bykov, before being seized.

The Ukrainian Navy, weakened significantly after the occupation of Crimea and defection of some naval units in 2014, was unable to deny the Russians sea control. This was compounded by Russian missile strikes against the Ochakiv naval base as part of the initial phase of the invasion. On 2 March 2022, it was reported that the flagship of the Ukrainian Navy, the Krivak III-class frigate Hetman Sagaidachny, had been scuttled. However, Ukraine can still hold at risk Russian naval forces operating off the southwest coast as they poise off Odesa.

Ukraine may possess a limited coastal defence capability with the Neptune missile system and artillery would pose a threat to Russian ships within range. Defensive mining has also likely taken place. In this regard, an Estonian cargo ship sank off Odesa after reportedly hitting a mine in late February. Russia has reportedly seized two Ukrainian merchant ships in the Black Sea, and five foreign merchant vessels have been damaged by missile attack.

It is possible that Russia will conduct an amphibious landing as part of an assault on Odesa, in particular given the deployment of additional amphibious ships from the Baltic and Northern Fleets prior to the outbreak of hostilities. Indeed, the presence of the Russian amphibious task group comprising around 10 landing ships constitutes powerful leverage, effectively fixing in place Ukrainian forces around Odesa that otherwise could be deployed to counter the Russian ground assault from Crimea.

Russia may yet undertake some form of amphibious landing around Odesa, most likely, following the securing of beaches by the landward advance, rather than conducting an opposed landing. In either case, as Russian naval forces operate closer to the Ukrainian coast, the risks to those forces will increase.

The Allied military response to the Russian invasion of Ukraine has sought to strengthen deterrence across the Euro-Atlantic region and ensure that Moscow is deterred from any actions beyond Ukraine. Jens Stoltenberg, the NATO Secretary General, has stated that over 100 Allied aircraft are on alert and more than 120 ships are at sea from the High North to the Mediterranean. The UK has deployed the Type 45 anti-air warfare destroyer HMS Diamond to the eastern Mediterranean, as part of air, land, and maritime reinforcements to NATO. The US has deployed additional air, land, and naval forces to the Euro-Atlantic, including, before the outbreak of hostilities, four additional Arleigh Burke-class destroyers. The Harry S. Truman CSG is, as of early March 2022, operating in the northern Aegean, and positioned to respond to any escalation in the region, whilst the USS George H. W. Bush is in the western Atlantic.

Although planned well in advance, the major NATO exercise Cold Response taking place in Norway in March and April 2022, and involving 30,000 personnel, 220 aircraft and more than 50 ships, including the British carrier HMS Prince of Wales, may assume extra significance given the potential role and value of the High North in deterring Russia. In this regard, John Lehman, Secretary of the Navy in the Reagan administration, has previously written on the effect of US-UK and NATO forward maritime operations in the Norwegian Sea in the 1980s on Soviet planning. Moreover, as in the 1980s, Moscow’s economic weakness will act as a significant constraint, with the international sanctions imposed following Russia’s invasion of Ukraine likely to result in a dramatic deterioration in Russia’s economic position.

The implications of Russia’s invasion, including massive pressure on the Russian economy and with the costs of the war rising as resistance grows, allied to renewed Western unity, pose significant external and internal risks to Russia. In naval terms, Moscow’s claim, as expressed in The Fundamentals of the State Policy of the Russian Federation in the Field of Naval Operations in the Period Until 2030, that Russia is a ‘great land and sea power’, is likely to be significantly undermined. Russia’s naval (and wider military) modernisation plans are unlikely to be sustainable in the face of Russia’s deteriorating economic position and potentially as land forces are prioritised for enduring operations in Ukraine. However, the Russian Navy will remain a potent force in the near to mid-term, barring a strategic shock, and given the potential that the Kremlin may, rather than admit the gravity of the grand strategic error it has made, seek to escalate and confront the West, NATO, including its navies, must ensure it can deter and if necessary, defeat any Russian threat.

Dr James Bosbotinis is the Book Reviews Editor of The Naval Review, and a freelance defence and international affairs analyst.

[1] The data on Russian forces in the Black Sea, eastern Mediterranean, and Syria is based on Lieutenant Van Lokeren (rtd.), ‘Russian Naval Deployments During the Ukraine War’, https://russianfleetanalysis.blogspot.com/2022/02/russian-naval-deployments-during.html, and ‘Russian Forces in the Mediterranean [updated weekly]’, https://russianfleetanalysis.blogspot.com/2022/02/russian-forces-in-mediterranean-wk092022.html ; and the IISS, ‘Russia and Eurasia’, in the Military Balance 2022, p. 208, https://www.iiss.org/publications/the-military-balance.  Image credit: DefenceImagery/OGL