Looking east out to sea on a blissfully beautiful day a few weeks ago, a view tempered only by the sight of clouds massing on the horizon, I had two thoughts. First, what would it have been like to stand in that same spot in June 1939 looking towards a continent about to descend into world war? And, second, was I stretching my imagination to consider today’s massing clouds to the east as an allegory for the ‘four horsemen’ saddling-up on that 21st Century horizon? I should add my vantage point prompted such reflection as I looked to sea over the debris of the redundant weapons testing area and other long abandoned Cold War infrastructure on Orford Ness, Suffolk.

In my final editorial I hoped I could be more upbeat, more optimistic, or more hopeful for the future. Unfortunately, hope is under attack and reality bites! The portends for the next decade are far from encouraging. Internationally – and critically, from a self-interested perspective, too close to home – state on state war has returned to Europe and rekindled a Cold War (with enmities now being repeatedly and publicly expressed between the West and Russia in particular). With this we now have the increasing probability of famine, especially in developing countries already under serious economic and population strain. And pestilence in the form of a pandemic and global warming that are far from being resolved, and from which we are distracted by seemingly more pressing political issues. And, ensuing from those three horsemen’s actions, death exacerbated by poverty and migration resulting from an increasingly fragile global economy. And as if to make problems worse, nations are becoming more protectionist and less inclined to be collaborative. Of course, all of the above is then further confused by burgeoning misinformation and outright lying; the perpetrators of which continue largely uncontested in any meaningful way where it counts (e.g. Putin’s, as yet, unassailed narrative within Russia).

As another contributor to this edition notes “we in the West are navigating our way through a critical grand strategic conflict with Russia over the Ukraine.” I agree and would opine we are doing so without a plan. I’m not going to rehearse in detail how we got to this parlous state, albeit financial crashes, the Afghan rout being the latest dent in the West’s credibility, Brexit (how well is UK doing outside any economic bloc?), our erstwhile lack of resolve to stand up to autocrats and their excesses, all played their part together with what one might term national hubris – in the modern context, immodest self-belief in the UK’s standalone status which, I would suggest, has yet to be earned as far as the rest of the world is concerned.

My former naval training repeatedly highlighted the ‘question four’ moment when conducting an ‘estimate’ on any problem. Has anything changed from one’s original estimate? If so, go back and rework the problem was invariably the correct next step. Putin’s War has certainly woken the West, but we still appear happy to tinker around the edges tactically and not act strategically. Am I being too harsh? Despite both Adm Radakin’s (CDS) and Gen Sander’s (CGS) recent public reflections, I’m not seeing any UK public or political appetite to address the looming dark clouds impacting national and international security. We have become immersed in short-term introspection, understandably (in part) because of the UK’s escalating cost of living crisis. But that itself has its origins in the breakdown of external security and repeated breaches of international norms!

As a French philosopher (and children’s author) once wrote “a goal without a plan is just a wish.” And to stop wishing we must accept the latest UK ‘estimate’ (last year’s Integrated Review of Security, Defence, Development and Foreign Policy) has reached its ‘question four’ moment – even the review’s title talking of a competitive age seems dated now war has broken out in Europe. Putin, and increasingly Xi, have changed the assumptions – recent events are seismic (more so than perhaps the ending of the last Cold War). A much broader view of world order might now suggest a future with essentially only two countries having the capacity to dominate the world but who have proven increasingly, of late, to have incompatible systems – USA and China. For years the simplistic (dare I say naïve) hope had been China would ‘westernise’ and align its practices with the more liberal capitalist West. But it hasn’t and we are getting to the point where hitherto seemingly positive dialogue is turning into proclamations of grievances.

But what of Russia? It has taken a ‘shotgun to both of its feet’, and is, by degree, destroying itself from within having pressed the economic powerhouses of the world to line up against it. Assuming sustained Western solidarity, Russia will perhaps remain very dangerous for the next decade but ultimately, I contend, is now doomed by Putin’s absolute power and conceit.

So much like the old Cold War (1947–1991) countries around the world, this time for pragmatic rather than ideological reasons, are beginning to align with the new spheres of influence. We are in grave danger of moving from a short-lived period of positive commercial competition to an era of corrosive military adversarial behaviour once more – i.e. Cold War II but with differing hegemons.

But we, in the West, are seemingly not yet in the material, let alone psychological, state to tackle this strategic ‘question four’ moment. Yes there is more vigour in Western alliances but does this amount to resolve to make anything but tactical (short-term) responses? Implementing robust sanctions against Russia and enacting weapons supply to Ukraine is but a start in addressing, what amounts to, a little local difficulty when compared to the greater geopolitical challenge presented by an increasingly assertive China and, eventually, a hugely weakened Russia. Indeed, might China now think of looking for ‘living room’ and resources in a weakened Russia, rather than satisfy its Taiwanese political ambitions; given that any likely international pushback would, in all probability, favour PRC military adventures against non-Western interests (i.e. to the northwest of China rather than to the east)? The February 2022 Putin-Xi Beijing accord seems to have resulted in little practical support for Putin from China, conceivably because of Putin’s continuing overtly abhorrent actions in the opinion of much of the global audience. Indeed, such actions in the public eye may have annoyed Xi because Putin has reinvigorated the cohesiveness and competitiveness of China’s largest trading partner (which is the West by some margin over Russia).

The Naval Review exists to generate a conversation. And in the last five or so years I have aimed, in this journal, to promote such. You may not agree with the analysis contributors to this journal and I (such as captured in my concluding thoughts above) have proffered over those years. But that is all to the good, especially if you respond with arguments that help develop our collective understanding.

One hundred years ago come September we lost one our most foremost maritime thinkers – Sir Julian Corbett. He equally stressed the need to educate and debate in order to develop, in particular, Royal Navy officers. Unsurprisingly, given the cover of this journal and the central theme focussed on Corbett in this edition, you may have guessed by now I, and many others, believe his relevance endures. I will not steal their thunder here but hope you enjoy a collection of articles related to Corbett in this edition.

I hope also, in the spirit of promoting a continuing dialogue, you will acknowledge that some may not see the world as you do. Two long-running themes on nuclear deterrence and global warming reappear in this edition. Again, you don’t have to agree with the contentions made, but I would hope you would acknowledge that no side of any complex argument ever has a monopoly on the truth. As I’ve opined many times before, we live in a ‘wicked’ world where many factors interact on any one issue to which there might be no absolute conclusion or answer, only a set of compromises and accommodations to help move us forward.

It has been a singular privilege to have been, for a time, your journal’s editor. I could not have undertaken such without the enthusiastic help and support of the likes of Tim Harris, Paul Herrington, James Bosbotinis and Emma and Kevin Rowlands, all, in their time, as part of the NR executive team. I remain in all of their debt. But sustaining vitality demands change and I am truly enthusiastic about the next steps for the Review under Mike Beardall’s direction as your new Editor.

The Naval Review has authority borne of longevity and a sustained standard of writing and ideas, it captures the enthusiasm generated by members who continue to regularly expose their thoughts to be tested amongst their peers and it is the embodiment of an enduring need for a conversation, in whatever medium, that focusses in on the maritime case from a defence and naval perspective in the UK. Ultimately you, the readers and contributors, are what makes this enterprise work – please, as I will as a ‘private’ member, continue to promote its worth to all and encourage our collective future to join the ranks of our membership. Thank you and au revoir. 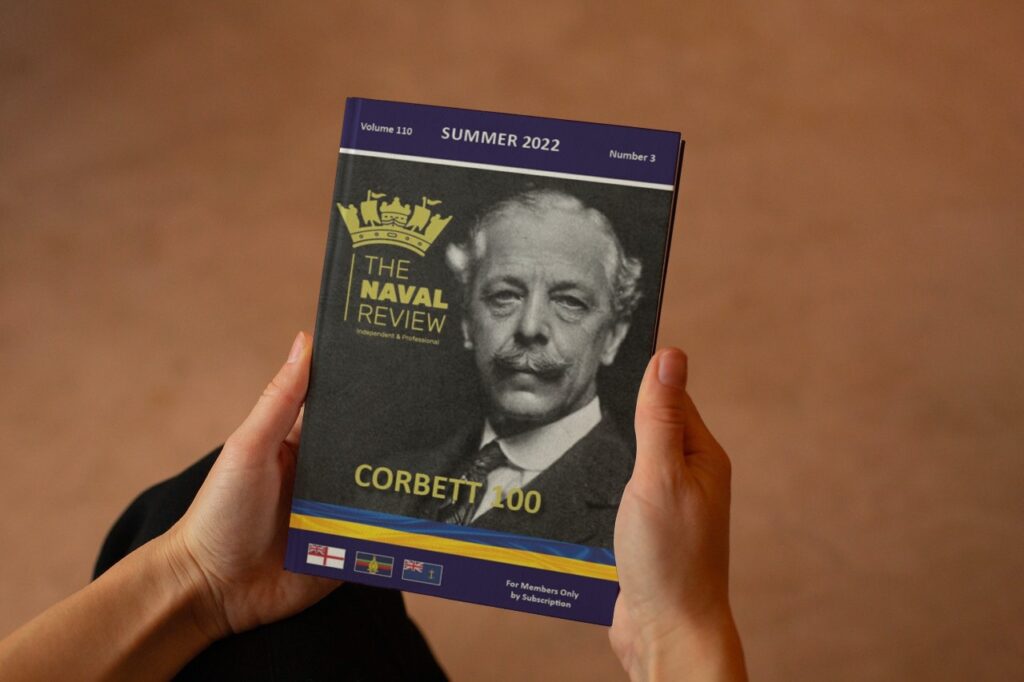