By the Editor:  The author lays down a challenge for individual reflection on the famous names assigned to the new Inspiration-class (Type 31) general purpose frigates.

It was an action, where more VCs were won more quickly than any other battle in the Second World War.  Lord Louis Mountbatten, when interviewed in 1974 recollecting the decision to mount the raid, said “the fact that it [was] regarded as impossible [made] it possible.”  Of the 612 who undertook the raid over a quarter were killed, a third taken prisoner and less than half returned home.  And what did it achieve?  The loss of the last large graving dock on the Atlantic seaboard available to the Kriegsmarine, thereby limiting options for Hitler’s remaining battleships.  Churchill and the Admiralty were obsessed by the Tirpitz lurking in Norway’s fjords. As he put it, “The whole strategy of the war turns at this period on this ship.”

Operation CHARIOT, the raid on the Normandie dock in St Nazaire, demanded bravery and nerve bordering on the suicidal to achieve.  In sum a small convoy of an MTB[1], an MGB[2] and 13 MLs[3] led by the First World War vintage, thus obsolescent, HMS Campbeltown (ex USS Buchanan)[4] – packed with explosives and roughly modified to look like a German Möwe-class destroyer in the dark – made their way up the mouth of the Loire estuary towards St Nazaire under the guns and searchlight of the German coastal defences.  The start of this transit depended on the submarine HMS Sturgeon lying in wait off the mouth of the Loire to provide a very precise navigation beacon for the raiders. A planned distraction air raid by five RAF largely failed because of poor weather and full cloud cover.

When inevitably the convoy was illuminated, using codes captured earlier in 1941 in Norway, shore batteries were dissuaded from engagement of the convoy after a few rounds.  The deception provided precious time and at about one mile to run to the Normandie lock gates (at 01:28 on 28 March 1942) the White Ensign was raised in Campbeltown resulting in every German shore and guardship gun opening fire.  By then steaming at 19 knots Campbeltown drove herself 10m into the Normandie dock gates.

Commandos and sailors spilled out from the ship, MTBs and MLs to destroy dock pumping stations and other facilities critical to port operations – all at great loss of life (remember the MTBs and MLs ran on petrol not diesel and were made of wood – not the safest of combinations under fire).  Heroism in pursuit of the plan, the likes of which few of us could conceive of today, appeared, however, to be for nought.  The explosives packed Campbeltown had not delivered the final coup de grâce to the dock caisson as planned

With the coming of daylight with her bows stuck fast pointing skyward and her stern settling in the mud, it was a puzzle to the Germans, as they ‘mopped-up’ the raiding party (those who had not died or had escaped via the remaining MLs to England), what had really been gained.

Clearly the caisson had been dented but was repairable, as were other port facilities.  The first Germans on board the stricken destroyer realised how obsolete Campbeltown was.  So assessed correctly it was an attempt to interfere with the dock’s operation.  But it didn’t occur to them the ship was loaded with explosives.  So much so that by 10:30 on 29 March the ship was swarming with sightseers when it detonated, killing over 350 and of course destroying the dock – the culminating purpose of the operation.

But why drag up such history now?  Yes, it is the 80th anniversary but so what?  We, collectively, have a penchant for forgetting or ignoring.  As a former commanding officer of the second HMS Campbeltown, I suppose I would opine thus, but it is much to the Royal Navy’s credit that such a famous name will be resurrected in the new Inspiration-class Type 31s.  The ethos of both the Royal Navy and Royal Marines is built on the quality of its antecedence.  Perhaps I might offer this very brief remembrance as a spur to other readers and members to briefly reflect in future pages of this journal on the history of famous names making up the rest of the Inspiration-class: Active, Bulldog, Formidable and Venturer.

[4] USS Buchanan (DD131) was part of the 50-destroyer transfer to the RN on the agreement to lease various naval facilities to the USN around the world. 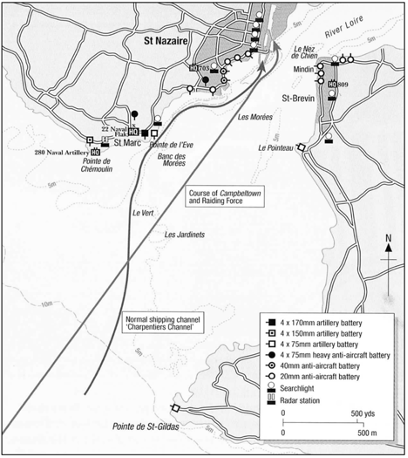